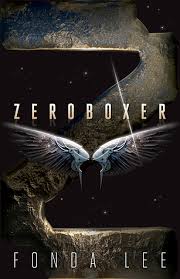 This week I’m really excited to present an interview I recently did with debut YA sci-fi author, Fonda Lee, who, apart from being a great writer and fellow sci-fi aficionado, was also a student in the first writing class I ever took many years ago! Her debut novel, Zeroboxer, was recently released by Flux. When I asked her some searching questions about the novel and her writing process, here’s what she had to say …

KC: Zeroboxer is an extremely unique story in that it merges the world of sports (a space-age version of boxing) with sci-fi, politics, genetics, and romance. What gave you the idea for this novel?

FL: Zeroboxer is really a blend of my own experiences and interests. I have a business background, and it was while I was working at corporate strategy at Nike that I first got the idea for writing a story about a young man who becomes a sport celebrity and has to deal with all the pressures and expectations that come with that. I knew I wasn’t going to write a modern day sports story though. I’ve been a science fiction fan most of my life. I’ve been a martial artist most of my life. So sports plus science fiction plus martial arts…

KC: While the story focuses closely on the protagonist (Carr Luka), you chose to buck the recent trend in YA writing and write his story in the third person rather than the first person. Did you make this choice consciously? What were some of the advantages you found in writing from this perspective?

FL: I usually know, going into a story, what POV feels right for the book. I knew Zeroboxer was meant to be told in close third person, so though it was my  conscious choice to write it that way, it never felt like there was any question. I really enjoy writing in third person. It provides such wonderful versatility when it comes to distance; you can be just as much in the main character’s head as with first person, but you can also step back and be a bit more removed at times. First person is like a set of fixed binoculars; third person is like a telescoping lens that you can adjust to see near and far. Zeroboxer is an action-heavy novel and I wanted the fight scenes to play almost cinematically in the reader’s mind, the shots cutting seamlessly from the wide lens to the close up. Can you imagine if all the action scenes were like, “I swung my fist, I dodged, I blocked”? I…I…I…ugh, talk about grating and tedious, like one of those first person video games!

KC: Genetics plays a large role in the story, particularly concerns about an uneven playing field in a world where genetic advantages are possible. Genetic enhancements have always been a controversial topic. Did you have any qualms tackling such a fraught topic in the novel? What were the major challenges in presenting a balanced perspective on the issue?

FL: That’s the great thing about science fiction: it’s the perfect genre to tackle fraught topics. Science fiction has a long tradition of addressing very important and controversial modern day issues through the lens of extrapolation into the future. Iconic science fiction series likeStar Trek and Battlestar Galactic (two of my two favorite shows of all time) handled all sorts of social, political, and technological subjects. My goal as a writer isn’t to take a side or not take a side; it’s to tell a good story. I want people to think about the issues that are inherent in the novel and that exist in our world today, but I want them to do that without noticing any authorial voice. The way to do that is to create the characters, put them in the situation, and get out of the way. In Zeroboxer, Carr faces major decisions but I take no stand on whether what he did is right or wrong; he does what he does because he is who he is. It’s up to readers to come to their own conclusions.

KC: You could be the poster child for a struggle to balance family life, work, and writing.  What advice would you give other writers who are struggling to make time for their writing?

FL: If you figure it out, let me know! All I can say is, treat your writing like a job. If you think of it as a hobby, don’t expect it to ever amount to more than that: a hobby. You probably already have a job, a family, and other obligations. Well, pretend that you just lost your mind and signed up to work another part time job of X hours per week and you can’t back out any more than you can back out of your current job or taking your kids to the doctor. Something might have to give. You might have to watch less television, eat more take-out, give up scrapbooking night, abandon your plans to clean the garage. So be it.

KC: Who are some of your favorite sci-fi and fantasy authors?

FL: I have a lot of favorite authors. Neil Gaiman is a master storyteller; he really excels at making the fantastical feel grounded in our world. I really enjoy Paolo Bacigalupi’s gritty dystopian fare. Both of them write YA and adult, which I hope to do. Growing up, I was enamored with Anne McCaffrey’s Dragonriders of Pern series and Issac Asimov’s robot novels; they both played a bit part in turning me into a speculative fiction writer.

KC: What are you working on now?

FL: I’m working on a new fantasy novel. It’s in it’s early stages, so I won’t say more lest I jinx it. I’m superstitious like that.

Thanks for sharing your time and thoughts with us, Fonda! We look forward to your next book and, for those who haven’t read Zeroboxer yet, pick up a copy today and … enjoy!!!