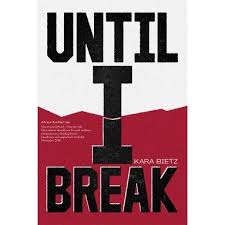 Last week at a Highlights workshop, I was lucky enough to meet Houston-based writer Kara Bietz, a YA author whose recent debut, UNTIL I BREAK deals with the difficult and often morally charged issue of school bullying. Kara was kind enough to share her work with me and her insights into her process in the following interview, as well as to give us a sneak peek into what she’s working on now. I hope you enjoy our conversation …

KC: The first thing that struck me about your debut YA novel, UNTIL I BREAK, (after the arresting cover design) is the way you handle the movement of time in the book, jumping back and forth from the present to the past. What were the main challenges of writing with that kind of structure, and how did you go about it?

KB: The first draft of this story certainly didn’t start off this way! As I wrote that draft, I kept thinking that it would be a much more interesting story if we knew the ending FIRST, and then went back and built on why the heck this kid was standing in the school hallway with a gun. As I worked through a backwards version of what I had already written, I had another thought…that going backward wasn’t getting to the heart of what was happening, either. That I also needed an element of “future”. It was a very muddy writing process, that’s for sure, but when I finally landed on the back and forth structure, the story unfolded easily. One of the challenges I did have once I decided on the structure was making sure that each individual timeline could stand on it’s own, as well as mesh seamlessly with the other timeline.

KC: The book is written in the first person POV from the protagonist’s (Sam’s) perspective. Did you have any difficulties writing a first person narrative in the voice of a young man?

KB: When I sit down to write, usually what comes out is the voice of a teenage boy. I don’t know what that says about me, honestly, but it’s a voice I’m very comfortable with.

KC: The story is fraught with moral complexity. There are no real “good guys” or “bad guys.” All the characters feel more like “works in progress,” trying to cope with their pasts in a way that helps them to handle their futures, even when their decisions are troubling or morally ambiguous. Thus, they all feel very rounded and true to life. How difficult was it for you to craft characters who are neither all good, nor all bad, but who all make troubling choices?

KB: I think we all have those moments in our past when we’ve made REALLY TERRIBLE decisions that affected not only ourselves but the people around us as well. No one out there is perfect, and I think it’s important to show that one bad decision doesn’t have to define you. Will it change your life? Absolutely. Can you recover from it? Absolutely. Life is a series of these decisions…sometimes you make the right one and sometimes you don’t. I believe it’s imperative that, as writers, we write real people. The good, the bad, the ugly, terrible choices and all.

KC: Can you name some of the authors/books who have influenced you most as a writer?

KB: My favorite writer of all time is Laurie Halse Anderson. Her book SPEAK is what made me sit down and start writing again after many years of keeping that part of me silent. While there are several authors that write about difficult topics, that book in particular showed me that it was okay to write about the not-so-pretty parts of adolescence. The gritty and real things not everyone wants to talk about. Some other influences were Chris Crutcher, Francesca Lia Block and E. Lockhart. During the early drafting phase of Until I Break, I read Gods in Alabama by Joshilyn Jackson. I remember finishing it and thinking HOLY CRAP…THAT’S how you tell a story. That, in addition to Speak, are books that have stayed with me for years.

KC: What are you working on now?

KB: I am in the thick of a first draft for a new contemporary YA that will be released from Riptide Publishing in the Fall of 2018. It is called UNAFRAID and it is an LGBTQ contemporary YA retelling of the Marius and Eponine story in Les Miserables, set in a football-obsessed, small town Texas high school. I’m really excited about it and proud to be writing it.

Thanks so much for sharing your thoughts and your process with us, Kara! We look forward to UNAFRAID!!!!